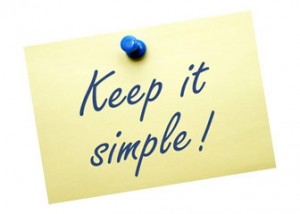 Let’s talk about the continual struggle between “Alpha Talk” and “Beta Talk”. Alpha Talk (which I prefer) is just clearly stating what you want and/or mean. On the other hand, Beta Talk is using words in conversation that “soften” the impact of what’s really being said. Now sometimes a bit of Beta Talk can be needed. People call it being “tactful”.

However, carried too far Beta Talk can entirely obscure the intended message. Some people (sissies) view Alpha Talk as too direct or harsh, so they engage in Beta Talk to soften the approach. For example…

The other day I saw a help-wanted ad looking for people interested in a career in “conversational marketing.” I had to applaud the person responsible for this stroke of recruiting brilliance. (Likely the result of the company’s failed attempts to recruit the “telemarketers” they needed to hire!)

Can’t you just picture the company’s executive team brain-storming new titles for jobs involving telemarketing? I don’t care how much creativity or lipstick it took to come up with “conversational marketing.” In my opinion it’s still telemarketing.

Maybe this is the same team who invented the term “inventory leakage.” Seriously?! The inventory is slowly filtering out the back door all by itself?! If that’s the case your inventory must be a lot smarter than my inventory. I’m not sure mine knows how to walk, much less leak!

Perhaps these folks came from the aviation industry. On my last trip through the airport I noticed a guy walking around in a red vest that announced his position as a “Mobility Assistant.” He must have been promoted from his previous job as a Porter.

Beta Talk in business is nothing new. Years ago the Ford Motor Company issued a notice after Firestone tires blew out on their Explorer SUV’s, referring to it as a “customer notification enhancement action.” Thirty seven letters were used to say what could have been said in six: RECALL!

Today some auto manufacturers don’t want to mention even the possibility of their cars “breaking down.” That might be too alarming. Instead they refer to this as a “mechanical disablement”, which could lead to “trip interruption.” I can only hope if my trip is ever interrupted because of a mechanical disablement there’s an “internal combustion resuscitation specialist” available to get me back on my way.

Finally, when did it become so unfashionable to tell people you’re in good old sales? Now everyone wants to say they’re in “business development” or “client relations.” I’m fine with either of these terms as long as somebody’s actually selling something, because that (along with good old Alpha Talk) is how successful businesses sustain their success!

There’s an epidemic of Beta Talk in business today and I think it’s hurting rather than helping. Think about it: would you rather receive the difficult message of being fired head-on or have it blurred by being told “We’re freeing up your future” or hearing terms like “out placement” or “alternate locations of employment?”

NOTE: My SFS co-instructor, Steve Toburen, nicely walks the thin line between Alpha and Beta Talk with his suggestion HERE on how to tell a worker you are terminating their employment with your company. Well done, Steve!

While it’s easy to make fun of Beta Talk I say those on the receiving end deserve the honesty that Alpha Talk often provides.