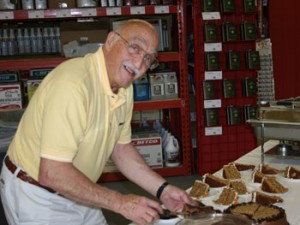 You know, all of us have “bosses”.  In fact, if you are an entrepreneur you have just traded one boss for many because every single customer is technically your “boss”.  (And let’s not even talk about “momma”!)

Now after I “cashed out” of my cleaning and restoration company and retired from full time business (at the tender age of 38) I knew I still wanted to keep my hand in the “grand game of business”.  Then Nick and John Paolella came calling and the rest is “history” or more accurately Strategies for Success. It has been a productive and gratifying relationship for all of us.

Why?  Because John and Nick are smart enough to leave a self-motivated, long time entrepreneur like me alone and he will work harder on his own than if he is “micro-managed”.  (Witness this web site as one example!)

However, I would like to focus this post on just one of my bosses- Nick Paolella- who truly has become a legend in his own time within this industry.  But instead of me waxing eloquent let me quote from a long time carpet cleaning veteran, Shawn Abbey with Abbey Carpet Care in Salem, Oregon.  Shawn just spent five days with Nick at our latest Strategies for Success seminar in Portland last week.  Here is Shawn’s take on SFS but more importantly on a man the whole world calls “Nick”:

My first Strategies week has come and gone, and I need a vacation. I don’t think my brain has worked so hard since college.

Tomorrow I’ll sleep in and enjoy a weekend doing nothing but process what I’ve learned. Monday, life as we know it will change… for the better.

My sincere thanks to the great teaching from Chuck, Bill, and Steve. Thanks also to the great staff at Jon-Don Portland, who hosted the event. But, my biggest thanks goes to Nick Paolella.

Here, we have an owner of a multi-million dollar company, who didn’t have to be anywhere he didn’t want to be. But at the last Customer Appreciation Day at Jon Don Portland, and the recent Strategies for Success class he was there! Cooking and preparing snacks, lunch, and footing the bill for dinner on Wednesday. Not to mention cleaning up after us! There were many things he could have charged us for (and we would have gladly paid!) but didn’t!

I’d say Nick was spoiling us but he would never admit it. Nick said he was simply doing what’s right in making sure his customers were well taken care of. And taken care of, we were! I’ll have to leave my RX-20 on the truck and push a wand for the next few weeks just to shed the pounds I gained from eating such great food, and enjoying such great care!

I’m sure I speak for many people who have been touched by Nick’s example of sincere customer service. May I say, “Thank you” to Nick for exemplifying a great model of quality customer service, and sincere care for me as a customer. A passion that I’ll pay forward in my business.

To the man who really put the word, “family”, as the mission for Jon-Don I say, “You have a loyal customer for life!!!”

Steve’s note: And I would add, “Thank you, Shawn.  We are absolutely at your service.  Don’t be a stranger on this site.”[/private]