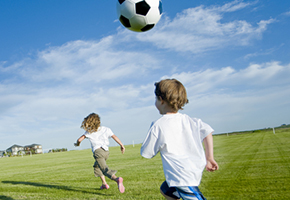 Recently I was watching a group of five- or six-year-old children who were having a soccer practice on an adjoining field. I noticed they were engaging in a pattern that so many young soccer players fall into as they learn the sport- “Swarm Soccer.”

As I watched the kids play, it was a classic demonstration of swarm soccer—everybody chases the ball and nobody holds back. The only players who were standing outside the “swarm” to receive the ball—should one of the kids in the swarm actually get lucky enough to actually kick the ball to him—were the two goalies. The two goalies were standing in front of their respective goals bored out of their minds and basically passing the time “picking daisies”!

For any of you who have ever watched young kids learning to play soccer, I’m sure you recognize what I’m talking about.

So I watched this swarm of kids moving up and down the field with their short little legs kicking furiously at the ball, each other, and anything that moved! Then I thought (as I often do) how does this apply to restoration and cleaning firms. And yes- “Swarm Management” would be a great moniker for the management style and organizational structure of many small businesses in our industry.

Well, apparently I’m not the only one who has recognized this similarity. Dr. Ichak Adizes noticed it and wrote about it in his book, The Pursuit of Prime. He observes,

A go-go company organized around people rather than around tasks eventually develops an extremely complicated structure. People do not know who is accountable for what. The organization acts like a team of small children playing soccer: every one of them goes for the ball, and, from the sidelines, they look like a swarm of locusts moving around the field. They all try to kick the ball and end up kicking one another in the shins and crying. Their coaches spend time lecturing the children on the value of teamwork. ‘Stop fighting,’ they tell the kids, ‘and help each other’.

The coaches’ speeches fall on deaf ears because the kids have no idea how to play as a team. The coaches have to tell them what their positions are and that they must stick to those positions in a way that does not ignore the ball.

You don’t have to be a rocket scientist to identify who the workers are and who the managers are in this “swarm soccer” metaphor for business.

Swarm Management doesn’t just exist in new or in smaller companies either. I’ve seen it in multi-million dollar restoration companies, and I’ve seen it in carpet cleaning firms that have been around for generations. And, as opposed to being cute, as it is in pee-wee soccer, Swarm Management can wreak havoc on a company. It will cause talented people to leave your organization and it yes- it WILL cost your company (and you) a lot of money!

Over my next few SFS posts I’ll illustrate some of the ways Swarm Management manifests itself in companies, identify some common causes of it, and indicate how you can correct the situation if it exists in your company.