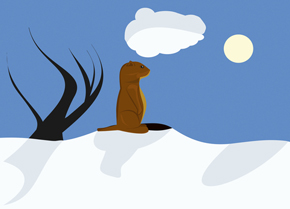 Each February 2nd throughout North America Groundhog Day is celebrated. According to Wikipedia, “If it is cloudy when a groundhog emerges from its burrow on this day, it will leave the burrow, signifying that winter will soon end. If on the other hand, it is sunny, the groundhog will supposedly “see its shadow” and retreat back into its burrow, and winter will continue for six more weeks”.

According to the Congressional Record the “legitimate” groundhog of the U.S. is Jimmy the Groundhog of Sun Prairie, WI. However there are many other notable groundhogs associated with this day including Smith Lake Jake, Staten Island Chuck, General Beauregard Lee and Wiarten Willie. But perhaps the most famous groundhog is “Punxsutawney Phil”, thanks to the 1993 movie Groundhog Day starring Bill Murray, Andie MacDowell and Chris Elliot.

NOTE: And yes, reputedly four days ago at 7:25 a.m. last Sunday the famous Groundhog Phil “saw his shadow” in the small town of Punxsutawney, PA. So that means our winter conditions will extend well into March! Now if Phil had not seen his shadow, it would have meant spring is just around the corner. All this in NOT good news for winter weary Northeast residents!

In the movie TV weatherman Phil Connors, played by Murray, is stuck in Punxsutawney, Pennsylvania on Groundhog Day due to a snow storm. The movie follows Connors as he relives the same day over and over again for an undetermined (but very long!) period of time. Although the message is unstated we are led to believe his self-absorbed behavior may be to blame. Only with the help of TV producer Rita, played by MacDowell, is Connors eventually able to enhance his own human understanding through the lessons he learns and finally escape by waking up on February 3.

Groundhog Day is a funny movie worth watching, but I must admit it would seem even funnier if it didn’t sound so much like life inside some small businesses.

Small businesses are reflections of the people who own and run them. As a result they take on characteristics that reflect the behaviors of their owners. For instance, if we’re chronically late our customers may eventually stop waiting for us and buy from our competitors. If we’re disorganized our customers and employees may become frustrated and leave us. And if we’re verbally abusive to our people we may not be able to attract or keep good people and as a result we’ll place a ceiling on the growth of our companies.

Executive coach and author Marshall Goldsmith hits the nail on the head when he states “The higher you go [in business] the more your problems are behavioral”. Thus the extent to which we master our behaviors can have a profound effect, either positively or negatively, on everything that takes place within our companies and on our ability to grow them. When we fail to master these behaviors, or surround ourselves with people who have, we frequently find ourselves repeating the same mistakes and reliving the same consequences these behaviors bring about.

Much as Phil Connors had to gain an understanding of his own behaviors and channel them to productive outcomes, we as business leaders must channel our behaviors in order to move beyond the limiting effects of our own Groundhog Day style management.

In this series I’ll explore two of the many behaviors we bring to our businesses: Focus and Discipline. My goal is to help our SFS website readers avoid the trap of trying to focus on too many things which of course results in focusing on NOTHING!