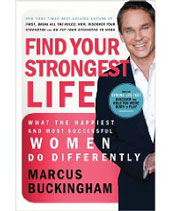 Yes the title is one of my favorite lines from the Paul Newman movie Cool Hand Luke. It pretty much sums up life, both personal and business. In this case I am talking about the new Marcus Buckingham book Find Your Strongest Life: What the Happiest and Most Successful Women Do Differently.

Marcus has written several alltime best sellers focusing on a person’s strengths to become successful. His first book First Break All the Rules was a groundbreaking study done by the Gallup Poll company. His last two books moved from business to individuals. He was doing just fine until he tackled women.

Being a fan of his books I was anticipating his new book and was going to buy copies for my two daughters. Before I bought them I went to Amazon.com to read the reviews. I have never seen such a polarization of comments. It is normal for any author to have a few people dislike a book. This time out of 171 comments as of today 25 were 1 or 2 stars out of 5. Some of the titles were “presumptuous & new age-y”, “a complete waste of time”, “strength strategist solves women’s problems.” That last one was about as condescending as a remark could be.

A recent quote from Exploiting Chaos sums up the problem: “one of the most difficult barriers to customer obsession is the belief that you already understand your customer.” In the cleaning business the majority of customers are female. The majority of owners of cleaning businesses are male. I can almost hear Strother Martin (captain) talking to Luke (Paul Newman.)

Marcus made the same mistake many of us make in that he really didn’t understand his audience or in our case the target market. If you are going to create a marketing plan be sure to include members of your audience in the planning stages.

After all you can’t avoid many 1 star reviews in your business.