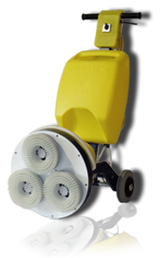 Here are just a few of the comments I have heard over the past few years as I have been promoting encapsulation cleaning:

Where’s the dirt go? (Thanks Clara!)

No one is ever going to pay for that.

My truck mount (sounds of Tool Time Tim grunting) will make you look silly. (Oh did you know the carpet is on the 20th floor?)

Is that all there is? When do you finish the job?

Yes but it won’t take out (insert any stain here). (Neither will your truck mount. That is why it is called a “stain” versus a “spot”!)

Bill, if they see how well it works they won’t buy a truck mount! (Muffled sounds as Bill is dragged into the alley and beaten viciously by a gang of angry Jon-Don truck mount salespeople!)

Oh yes and there are many more statements even worse than the above but I am trying to “protect the guilty”! I have found that the longer a cleaner has has been in the business the harder the idea of encapsulation is to accept. For the youngsters in the group back when “steam cleaning” began the largest cleaning association in the country refused to accept these crazed rebels into their organization.

Well, all of the above was just my long-winded way (I’ve been hanging around Steve Toburen too long!) to introduce a story from an industry veteran on how he has used encapsulation as one of his cleaning tools.

We made an unofficial, non-scientific observation last week as to the performance of Matrix Double Strength Encapsulate. We have tried a few other encap products over time. They were all OK but we always end up back with Jon-Don’s DSE. Please feel free to pass this along if it is helpful.

As you know, most of my early career was spent with DuPont. During that time DuPont was developing and rolling-out what eventually became known as ResisTech. We believed at that time that it was the first encap product. After the long development and roll-out stage the Resistech product performed exceptionally well.

Since most of the folks on the team had been used to TM extraction for most of their careers, it became the SOP (standard operating procedure) at DuPont that the carpet should be extracted about every 4 or 5 ResisTech cleanings. The thought was that you eventually have to “empty the sink”. Also, we had a lot of clients asking “Where does the dirt go?” So the “powers that be” at DuPont made it standard procedure to extract after 4 or 5 encap cleanings.

With this in the back of my mind…

We have a large funeral home that we clean about 4 or 5 times a year. The total square footage is 12,000 feet. When we first started cleaning them we only had a truck mount so that’s what we did. Then when we bought our first encap machine from Jon-Don we began encapping.

At first we would encap the secondary areas and TM the high traffic areas, eventually moving to complete encap. We have encapped the whole facility now about 5 times in a row. It always looks great when we finish.

Last week they called and only needed their lobby and hallways cleaned which is around 4,100 square feet. I told Elissa that we really needed to TM this time because it had been encapped 5 times. I felt we should “empty the sink”. Following a very thorough vacuuming we cleaned the areas with our truck mount.  (Which took more that twice the time,fuel and energy!)  When I got back (late) Elissa said that it would be interesting to see the waste water. When we drained the TM, I was surprised at what we found.

Normally when the TM is drained there is dark water followed by wet sand and other particles as the tank nears empty. We’ve all seen it a million times. I expected pretty much the same this time except I expected the particles to be much smaller since the encapsulation process breaks the soil up into smaller “slivers”.  What I found surprised me …

The water was somewhat dark but not as dark as a normal TM job. However, what intrigued me was that there was NO detectable signs of particulate in the waste water. I’m sure that there was some suspended in the water but none was notable.  There wasn’t even any particulate soil in the tank after draining.

After all of this I am more convinced than ever of the effectiveness and validity of the encapsulation process. We are going to be doing much more encapsulation and much less truck mount cleaning.

Thanks for sharing Larry! Glad to hear things are still going well for you. (Go here for more of the story on Larry and Elissa’s path to success.)

Thinking about adding encapsulation cleaning to your business?  Then download our new free Special Report on Building Commercial Encapsulation Routes.

4 thoughts on “Encapsulation- what’s all the hype about?”