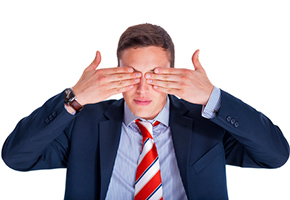 Herb Greenberg founded Caliper, a human resource consulting firm, in 1961. Since then the company has evaluated more than two million candidates and employees for its clients. Caliper also advises companies on how to make job interviews more meaningful, a task to which Greenberg brings a distinct perspective…he’s been blind since the age of six.

In addition, his experience assessing athletes for professional sports teams—such as the 2004 NBA Detroit Pistons—has shaped his definition of a “winner.”As owners of small businesses, we’re always looking for talented people for our organizations, so I wanted to share some insights I gained from reading a recent interview with Herb.

Avoid overemphasizing or misreading visual cues when evaluating people for jobs or promotions. Most people depend too much on their sight—judging how a person looks to determine whether they’ll fit the part. But some of those cues can be misleading. We might find ourselves saying things like, “She looks very professional,” or “He looks like he would fit in.” According to Greenberg, that first impression can then become the context for the rest of the information we gather about that person.

Instead, delve below the surface. Get a sense of the person’s character and what they’ve learned from both their accomplishments and their failures. Rather than focusing on what you hope they’ll accomplish in the future, look closely at the things they’ve actually accomplished in the past.

Try using non-visual cues. Greenberg believes a person’s voice, not their eyes, is the window to their souls. He says, “People can work on their smiles. There’s so much plastic surgery these days that someone can actually buy a certain look. But voices are genuine.” So, rather than simply looking at your candidate, try focusing on their voice during the interview. Do you hear genuine warmth, enthusiasm, and sincerity?

Look for the qualities of a professional athlete. “Psychology is more important than talent when it comes to winning,” Greenberg says. “You can have all the talent in the world and not be able to make use of those strengths if you lack the character and determination and enthusiasm.”

According to Greenberg, the questions that keep coaches up at night are the same ones that should be keeping you up. “Does this person have the inner fire to drive him to the next level of performance? Can he work with the rest of the team? How coachable is he?”

In professional sports, when a player isn’t producing, or when he isn’t a good fit with the rest of the team, he’s either benched, traded, or his contract isn’t renewed. But, in business these options don’t exist. So, it becomes extremely important to get the right people on board in the first place, or if you have managers in place already, to make sure they’re the right people.

Look for the same three qualities Greenberg looks for in winning athletes: self-discipline, competitiveness (not combativeness), and a positive sense of self (not arrogance).

Finding winning people to help you build your company is one of the most important jobs you have. It isn’t simple, but now you can do it with your eyes closed.