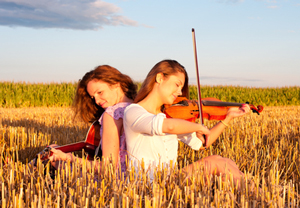 When you hear someone described as playing “second fiddle” it is usually not a flattering title for the person wearing it. And the Merriam Webster dictionary doesn’t help matters when it defines “second fiddle” as “having secondary status, or one that plays a supporting or subservient role”!

So the “second fiddle” title conjures up images of being second rate, living in the shadow of the one in first place, or riding someone else’s coattails. Let’s be honest here- it’s not a position most people aspire to hold. However…

In my opinion many “first fiddles” would not have achieved the success they did had it not been for the people who served as their second fiddles or “sidemen”.

The whole world knows Elvis Presley and the fame he gained in his career. What you may not know is that it was Scotty Moore who served as Elvis’s first guitarist, manager for 14 years and his sideman, eventually being inducted into the Rock and Roll Hall of Fame himself in 2000 in the sideman category.

Don Henley and Glenn Frey became famous with their band, The Eagles. But they were very capable sidemen for Linda Ronstadt before going out on their own. Phil Collins was a sideman to Peter Gabriel in the rock group Genesis before taking over lead vocals after Gabriel departed the group.

Fourteen of the most famous second fiddles, or sidemen, in American politics were Vice Presidents who went on to become “first fiddles” of the United States. Several of them became legendary statesmen in their own right, making significant impacts on both American and International stages: John Adams, Thomas Jefferson, Theodore Roosevelt, and Harry Truman to name just a few.

“Second fiddles” aren’t limited to just the world of music and politics. The business world is loaded with examples of executives who served as sidemen to much more recognized industry leaders.

In fact, I’ll state that any of the second fiddles I mentioned played a significant part in helping their more visible counterparts achieve the success and notoriety they enjoyed.

Every front man recognizes (and has a deep appreciation for) the invaluable contribution his sideman makes. And every sideman understands the critical role he plays with his front man. So in my next SFS Instructor’s Blog I’ll explore in more detail how each party in this equation can maximize his own performance and in turn maximize their combined performance as a synergistic TEAM.