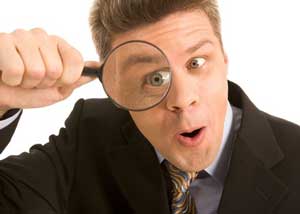 I once read an article by Warren Buffet detailing his overall negative view of many CEO’s performance. (By the way, just to set the record straight—if you’re the owner of a small business you’re a CEO! Even if you don’t feel like a “Chief Executive Officer” pushing that cleaning wand in a greasy restaurant at 2:00 AM!)

Mr. Buffet bemoaned the fact that most CEO’s (and entrepreneurs) have no measures by which to hold themselves accountable. Now as appealing as this “lack of accountability” might sound we all need measures to keep us productive. (And to hold us to an “honesty level” with those who depend on us- including our employees and families.)

In a small business the relationship between the CEO and his or her employees is usually very chummy and congenial. (Or there may be an undercurrent of intimidation and fear involved!) So pointing out the boss’s shortcomings to his face is distasteful (he’s your buddy!) and/or dangerous! (The man will fire people on a whim!) Either way bosses of small companies very seldom receive constructive criticism or are “held accountable”.

In fact, Warren commented in his article that “…criticism of the CEO’s performance is often viewed as the social equivalent of belching!” This is especially true when you’re sitting at the boss’s table AND eating his food! If an employee ever does have the nerve to counsel his or her employer everyone else is shocked and amazed. They (and especially the boss) can’t believe it actually happened! So this often very valuable business input is ignored and dismissed.

The same is true with mid-level managers (or spouses) who criticize their boss directly. Usually they’re not “long for the table”! Even if the offending employees aren’t asked to leave it can often become so intolerable that they frequently wish they had quit!

Few CEO’s admit this condition exists in their company and fewer yet freely give up their privileged position of non-accountability. And why would they? After all it’s their company; it’s their money; it’s their name at the bottom of the company checks. So why stir it up when they have a good thing going, right?

Actually, no, it’s NOT “right”- it is short-sighted, destructive and stupid! Eventually this non-accountability will catch up with this free-spirited entrepreneur and their company. It shows up as under-performance, stalled growth, or company failure—none of which any CEO worth his salt would accept from one of his employees! But since the boss has no one to be accountable to who will challenge them BEFORE it is too late?

Now if a company has grown to where it has a board of directors (or even advisers) to help direct the business it’s usually populated with people who know and like the owner: family members, friends from church, business colleagues, etc. These are usually very nice, polite people who aren’t likely to “belch at the table”. So, when they feel they must deliver tough advice they couch their comments in “niceness”- often to the point where the clueless boss completely misses their point! After all, many of us don’t “get” subtleties. (I usually have to be hit with a ball bat to recognize when someone’s trying to tell me something!)

And once again- if you analyze who is reporting to the CEO it’s populated with those whose pay checks they sign. This fact is not lost on these employees and they instinctively recognize the tell-tale signs of when they’ve belched one too many times: the boss’s glaring eyes, the bulging veins in his neck and his flushed complexion are usually dead giveaways!

So here’s the deal: You as the owner or manager in your company simply can’t count on the people around you to hold you accountable! (And this in spite of all your comments about an “open door policy:, blah-blah-blah!”) Instead, you will l have to rely on a different set of performance metrics to measure your effectiveness as a leader. Let’s talk about this in my next SFS Instructor’s Blog post…