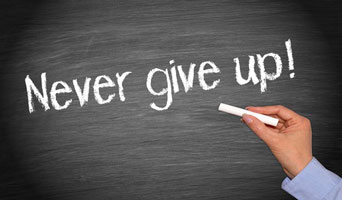 My fellow SFS instructor, Steve Toburen, quotes the British statesman, Winston Churchill, several times during our Strategies for Success seminar. Like Steve, I too am a big fan of Sir Winston…

The Second World War was still gaining momentum on October 29, 1941 when Sir Winston spoke at the Harrow School in London. The horrific Nazi carpet bombing known as the Battle of Britain had ended just months earlier and the United States wouldn’t officially enter the war in support of Britain until December of that year. So things looked grim for the English people!

Those powerful words were just one small part of the larger speech he gave that day. Yet through the years the quote above has continued to resonate with people as they work through difficult times. As you might imagine I have found these words to be poignant as they relate to business and especially when things “get tough”! (As they do for all entrepreneurs!)

It seems the longer a company stays in business the tougher things can be. By taking a few lessons from Sir Winston’s speech we can help our business work through adversity and stay on the path to success and sustained growth. For example…

1. Start with the right “long-term mindset”. Churchill knew the conflict in Europe wasn’t going to be a short one. He also knew Britain was woefully unprepared to defend itself in a major conflict. So he committed his government to prepare for a prolonged war and to do whatever it would take to defend itself against the enemy.

What’s your mindset on your business? Did you get into it thinking you could make a quick buck and then exit? Or maybe with the idea of only making enough money to support yourself? If so that’s not a “business”. That’s a “job” and probably not a very good job at that!

Please recognize that successful businesses aren’t built overnight. If you’re going to be in business do it with a long-term mindset. This way you’re not as likely to flinch when it comes to making major investments in equipment or buildings. You will also bite the bullet and hire top talent. And of course you will work through the discouraging slow times that will inevitably occur. But also…

2. Don’t get “burned by the sunshine”. Although England was separated from the WWII conflict by the English Channel Churchill knew Hitler would eventually bring his war to the British shore. Turning a blind eye and hoping things would get better would have been as foolish as standing in warm sunshine hoping winter never comes.

Most problems in business don’t materialize out of the blue. Many have their beginnings during good times, when business is booming and profits are strong. Typically this is when business owners let their guard down. This is also when they let themselves get sloppy or undisciplined with managing their business. We tell ourselves the sun will always shine…until it doesn’t!

One of the keys to success in business is to always run it lean. (Even when sales are booming.) This way you’ll be better prepared to handle adversity when the pendulum of business swings the other way . And it will! I’ll share more “never give in” thoughts in my next SFS post.