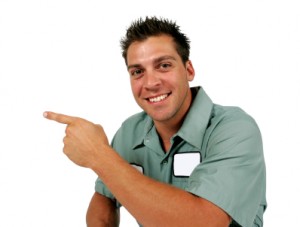 I was reflecting on my thoughts last week on old fashioned marketing techniques like using a door hanger. (DH) What’s not to like? Cheap, quick, effective and nothing is more “targeted” than physically placing your marketing message in the neighbor’s door. The DH concept worked great when my partner Chris and I were on the truck. After all, we were MOTIVATED!

Then we grew. (At least partly due to our door hanging efforts!) And disaster struck! Our technicians just wouldn’t put out door hangers. (Actually we had many other issues to work through when we made the difficult progression from “owner on truck” to employees out there. Don’t get me started!)

So it was time to put on our “Employee Eyeglasses” and figure out how we could “git ‘er done” with our staff. Maybe some of these ideas will help you even with other employee issues than just putting out DH’s.

1. The first thing we realized is we needed to “make it easier to do ir right than wrong” for our technicians. So instead of storing our DH’s hidden away in a box on the truck our dispatcher would put five in each Job Folder when he or she made up the Daily Production Sheet the night before. (Don’t know about Job Folders or Production Sheets? Well, you’ll just have to attend SFS!) Now the door hangers were staring the tech in the face when he opened the Job folder! And if they were left in there when the Folder was returned after the job the Operations Manager could chew the techs out. It takes constant reminders (nagging) for DH’s to work (happen) out in the field.

2. Especially when the tech was working alone we needed to book him or her a little lighter to allow time to actually put the DH’s out. On a two person truck if the crew worked things right there was not usually a time penalty with running the door hangers.

3. But even with these two steps we were hitting the wall. And then inspiration struck! We motivated our techs to actually put out the door hangers with a contest! There was a place for the coupon on the back to have a “Authorized Signature.” The tech would sign the ones he put out and the results were tracked monthly on who had the most DH’s returned. We made a “horse race” out of it by tracking daily results on a chart in the office. The competition was fun plus the monthly winner got a dinner for two at one of the nice restaurants we cleaned. We would also track results over every three month quarter and the quarterly winner won a hundred dollar bill!

These three steps did not work ALL the time (what does with employees?) but our door hanger distribution went up dramatically and so did our business! Sometimes the old fashioned basic stuff does work!

PS So what “employee motivating” tactics have worked for you? Write me at stoburen@StrategiesForSuccess.com with your ideas. We’re all in this together, you know!