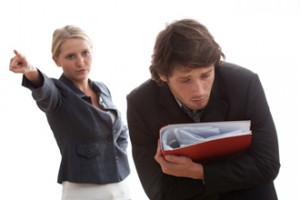 As discussed in Part 1 of this series, bullying at work can take on different forms including those of customers, competitors, and even our own fears. But I’m sure we can all agree that the most common form of bullying takes place between people that know each other. Unfortunately the workplace is no exception.

Research indicates workplace bullying behaviors fall into four very broad categories, two of which are addressed this week. Following each category are examples of how I’ve seen the behavior play out from my own experience.

Verbal Abuse. From swearing to name calling to belittling, the classic example of verbal abuse involves yelling, screaming, or humiliating the target, often in front of other workers.

Less obvious and frequently ignored is malicious social bantering or teasing: “Hey, Joe, I was just teasing. Can’t you take a joke? After all everyone knows your wife wears the pants in your family.”

Retaliating against a person after they’ve filed a complaint is another familiar bullying tactic: “You want to run to the boss all the time and squeal on me? Just remember that every dog has his day, and my day is coming.”

With today’s electronic technology we also have a new and rapidly growing form of verbal abuse: cyber-bullying. If you think this is limited to just younger employees, think again. Workers of all age groups engage in it and although this abuse takes place using the written word it can be just as threatening as the spoken word.

Physical Abuse. Physical bullying encompasses everything from standing too close to someone in a threatening manner to throwing objects (tools, equipment, office supplies, etc.) in anger to causing physical harm by bumping, pushing, shoving or even punching another person. Less threatening, but still damaging, forms of physical bullying include staring, glaring, and other nonverbal demonstrations of hostility.

Overt threats are a real issue associated with bullying and take place on a frequent basis in many organizations. I know stories of technicians who bully other techs by telling them “If you don’t stop working so hard and making me look bad I’m going ring to your scrawny little neck”. Or a project manager who tells one of his subcontractors he’s going over to his house to physically attack him in front of his family if the job doesn’t come in under budget. Obviously these are extreme examples, but they’re not as rare as you might think. If you’re a company owner they might be going on right under your nose.

Your best strategy to combat workplace bullying is to have a zero tolerance policy. Any time you know, or even suspect, that bullying is taking place within your organization it needs to be addressed immediately, documented fully, and the underlying reasons for it resolved.

The days when verbal or physical bullying was tolerated in business are long gone—if there ever was such a day. Not only is it unethical and illegal, but in today’s employment market most workers won’t put up with bullying just to ensure they keep their jobs. From a competitive standpoint no business can afford the corrosive affect bullying, and the resulting hostile work environment, has on the attitudes and commitment of their employees.