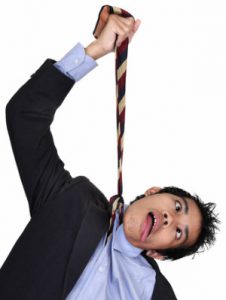 Over the years of working on leadership issues with small-business owners, I’ve observed in many of them a behavior I refer to as Business ADHD Leadership.   (Obviously based on Attention Deficit Hyperactivity Disorder management.)  This ADHD management style is one of several entrepreneurial behaviors that derail leaders and their companies and keep them from achieving their goals. I call it ADHD Leadership (ADHDL) because the behaviors parallel the behaviors of people who have Attention Deficit Hyperactivity Disorder.

Studies have shown that between 5% and 10% of the general population is afflicted with ADHD. My guess is the percentage of ADHD leaders in small businesses is much higher. I’ve seen it demonstrated in one-truck operations, as well as in multi-million dollar organizations. Let’s look at how Business ADHD Leadership works in practice …

As an ADHD Leader the owner quickly becomes tired of the daily grind of running his business.  He’s a charter member of the “I’ve Done It Once, Now I’m Bored” club!  The emotional “rush” of getting the business started, or even from the project he’s currently working on, is no longer there. The business has lost its “sexiness”.

As a result, the owner looks elsewhere for excitement and professional fulfillment. But the inevitable result is the same … pain and frustration. As a former client once stated in utter exasperation, “We keep stabbing ourselves with our own knives!”  (Or as Steve Toburen frequently quotes during the SFS seminar “We have met the enemy and he is us” from the old comic strip character Pogo.)

Come on … be honest here.  Didn’t you go into business for yourself  because you were a lousy employee?  (Or because you were basically “unemployable”?) Or the work you were doing wasn’t stimulating enough to keep you excited and interested anymore? (“Oh my gawd, please don’t make me do that one more time!”) Or MAYBE your boss simply wasn’t willing to put up with your inconsistent performance AND/or lack of follow through on projects so he or she hit you with the now famous Donald Trumpism:  “You’re fired!”

If you don’t recognize these behaviors and address them you will doom yourself and your company to running around in circles year after year — feeling busy all the time, but never really getting ahead.  (This can be detrimental as illustrated in Steve’s SFS leadership mantra: “The fish rots from the head down!”)

NOTE:  Don’t get the wrong idea here. I’m not a psychologist, psychiatrist, or a medical professional who is trained to make a clinical diagnosis of a condition or a disability. However, I have worked a long time with a lot of different business owners who have struggled with trying to grow their companies. The problem is they keep getting side tracked time after time by their own behavior. These hard working owners create incredible frustration to themselves, their family and their employees — simply because they don’t recognize the problem.

So over the next few weeks I’ll discuss identifying characteristics of the Business ADHD Leadership manager. We’ll look at the destructive effects they can have on a business. Then we’ll offer some suggestions on how to minimize the impact of these behaviors.  Meanwhile, meditate seriously on one question:  “Does my life have at least some of the Business ADHD factors above?”  My guess is it does!