[private]OK, folks, so in my last post I wrote eloquently over “where is the recession?” and how the average complacent Colorado contractor (CCC) in my recent house renovation had zero “sense of urgency”.

Now I’m not going to flog my sojourn down in the trenches of remodeling to death but let me share one more anecdote with you. I think it will resonate. (If it doesn’t- blast away in the comments below!)

Over the last fifteen years since leaving our beloved Colorado home and turning it into a rental (which still pains us) Sioux’s and my standards have increased considerably. (Not too mention that the past fifteen years as a rental have not been kind to the house either!) So we were shocked when we saw “how we used to live”. 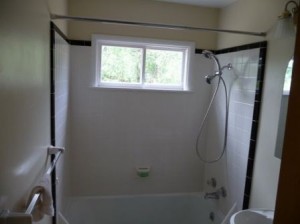 One thing that Sioux said had to go was the tub in the master bedroom. Stained, fading porcelain and with the cast iron substrate showing through- it was on it’s last legs. However, my will to replace it also faded rapidly as I examined the major disruption and cost involved of new plumbing, new drywall, new ceramic and of course , a new tub. Then inspiration struck …

We would have it professionally resurfaced! We had this done with the shower pan of my mother-in-law’s house and it was attractive, easy and cost-effective. So I called the contractor, left a message on his answering machine (in my entire three weeks in Colorado I don’t believe I EVER talked with a live person on the initial call!) and, miracle of miracles, he actually called me back!

Even better, the contractor then showed up (a bit early which is a small Negative Moment of Truth but I can live with that) and casually glanced at the tub. “It will be $500.00.” and he turned to leave. I wanted to say, “Aren’t you going to test it or let me see some samples or at least sweet talk me a little bit?” But instead I said, “OK, let me think about it” and he casually walked away without the job.

I never called him back. Why not? It’s true, I felt the price was too much. But on the other hand I was under pressure and with just a bit of personal interest and professional consultative type selling I would have been putty in his hands. After all, the 500 bucks would have been tax deductible! However, Mr. Resurfacing Contractor complacently walked away from this money when with just a little more effort he could have secured another job- and just maybe a Cheerleader.

My point in all this? Don’t let the combined twin devils of complacency and arrogance doom your business. You have a choice- sit around at the Dew Drop Inn and complain about the economy AND that customers don’t appreciate quality now. (Like my tub re-surfacer likely is doing right now!) OR you can make each and every call count. How?

Once you have ALREADY invested in the marketing to make your phone ring PLUS you have spent (wasted?) the time to actually drive over and do the pre-inspection AND taking into account the potentially enormous amount of referrals you will lose by not focusing on this job, why would you not follow a tested and proven pre-inspection script? (We offer a tried and proven FREE pre-inspection system download here!)

Sorry to go on and on but this complacent yet at the same time complaining attitude just frosts my cookies! Don’t make me come out there and whop you up the side of the head![/private]