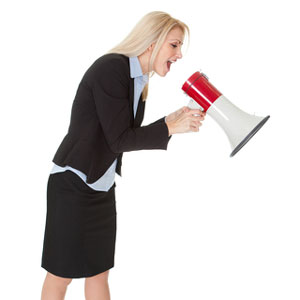 Over my last three posts we’ve looked at LOTS of workplace bullies! But I can’t leave my “Bully Pulpit” without addressing who may be the biggest bully of them all—the business owner!

The legendary former CEO of Sunbeam, “Chainsaw” Al Dunlap, serves as the perfect poster child for bullying bosses. After all you don’t earn the additional moniker “Rambo in Pinstripes” because of your nurturing management style. When once asked if successful managers could be friendly Dunlap growled, “You want a friend? Buy a dog.”

Of course the “Queen of Charm” herself, Leona Helmsley, ran a close second. She was known to fire people at random, sometimes while in mid-sentence of a completely unrelated conversation. Other charmers include tough Cincinnati Reds owner, Marge Schott, WorldCom’s Bernie Ebbers, and of course Dagwood Bumstead’s cartoon boss, Mr. Dithers.

There are several levers commonly used by bosses to bully people in their organization. The first is the power they wield as a result of the position they occupy. This can become bullying on steroids when you add in an over-active ego. So the boss bellows, “If you don’t start getting these jobs done right, heads are going to roll!” (He might have a point. Maybe heads DO need to roll. People have to be held accountable for their performance.)

But what I’m taking issue with is the manner in which the bully is delivering their message. The owner holds the trump cards in the company and if standards aren’t met they should have the option to discharge the under performer. But they doesn’t have to flaunt his authority by threatening people and the business owner certainly shouldn’t try to bully someone into higher performance. That’s like trying to settle down a dog by shaking a stick at him!

Sometimes bullying is more subtle. Off-handed comments like, “You expect to get paid for this?” or “How long have you worked here, not counting next week?” might be said in a humorous tone, but employees understand the underlying message is really, “I’m in control of your future at this company and you’re not.”

Differences in income are sometimes used as a bullying lever. As people move up in an organization income perks and power usually follow, but that doesn’t mean you should wield them. When this happens it doesn’t take long for bullies to become full of themselves and try to throw their weight (and bloated paycheck) around.

A third lever is the intelligence (real or perceived) of the boss. This can apply to both formal education as well as professional experience. In many small, entrepreneurial companies this intellectual separation is the status quo. After all, who knows more about the services the company offers than the person who founded it, right? When pressed, some owners are all too eager to reinforce this point by telling you to “Quit questioning everything and just do it the way I told you! NOW!” So much for enlightened leadership!

Let’s face it: the competent people in your organization are really there on a voluntary basis; nothing is forcing them to stay with your company. They know that smart employers would eagerly welcome their talents elsewhere. As well known author and executive coach Marshall Goldsmith states, “The reality for leaders of the past and leaders in the future is that in the past, very bright people would put up with disrespectful behavior, but in the future they will leave!” I would submit that Mr. Goldsmith’s “future” is happening today!

The underlying reason people choose to stay with a company is because they enjoy the challenges their work provides and because they believe in the mission and direction established for the company. Use these as the motivating forces to keep great people with you, not bullying. When you find anyone in your organization bullying someone else, enlighten them. Let them know that bullying insults the intelligence of the bully (not the bullied) and that it will absolutely not be tolerated in your company!