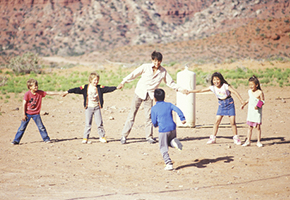 Ah yes. I’ve been reflecting on my lost forever days of childhood. I’m overwhelmed with nostalgia! Such vivid reminiscences of a joyful time that included abundant curiosity, constant learning and seemingly infinite times of simple amusements! For example, before the technology invasion our youthful enjoyment came from creative games and activities. (Today of course, games are held in the palm of the hand and require ZERO imagination and creativity!)

A few games from my youth that come to mind: Hot Box, Hide-and-Go-Seek, I Spy, and my personal favorite, Simon Says. The name for the game Simon Says says it all. Evidently the game originated from the ancient Roman philosopher Cicero with the phrase “Simon Says” being loosely translated from the Latin meaning, “Cicero says”. In other words- when Cicero gave an order, it was followed!

But woe to the kid who impulsively follows the command “Now put one arm behind your back”! Yes, he or she will be disqualified from the game for acting without the “permission” of Simon. And of course the last child standing becomes the newly appointed “Simon” for the next round.

NOTE: With a sly Simon leading this game it can be tougher than it sounds. In fact, when his students start to fade over a long afternoon SFS instructor Steve Toburen puts them through a round of “Simon Says”! They wake up fast!

So now think- WHO are your “Business Simons”? And do they in fact deserve your blind and unquestioned obedience? Please analyze WHY you are following this “Simon”! There are too many self-anointed gurus and self-proclaimed experts in this industry preying upon gullible cleaning and restoration contractors! (And of course another very dangerous “Simon” is “Well, everyone else is doing it this way so I guess I should too!”)

Now if you find yourself tiring of Simon’s so-called rules then the choice is obvious—you must change the game! BUT becoming a game changer sometimes requires reinventing the way your service or product is delivered.

A perfect example of big time game changers is the founder of Wal-Mart, the late Sam Walton. Sam was asked about his success in building the Wal-Mart empire. He simply replied, “We go where they ain’t.”  “Go where they ain’t”—what a brilliant strategy! While the K-Marts, Sears, and other behemoths complacently took their customers for granted, ol’ Sam was taking the game to his customers!

Yep, instead of playing Simon Says Sam was setting up stores in small towns while at the same time winning loyalty from those who had suffered under the rule of K-Mart and others for so long. Eventually, Sam circled his wagons around their stronghold and literally choked the life out of them!

Like Sam, one must be creative and quit blindly “following Simon”! And that is exactly what the Strategies for Success seminar is all about- finding “holes in the market”. Steve Toburen wisely states the biggest “hole” out there is contractors who totally ignore the “Emotional Dynamics” of the loss. He says if you can consistently create a Cheerleader out of the insured adjusters will fight to get your company on the loss. You know what? Ol’ Steve is right!

Or SFS instructor Bill Yeadon says to increase your “Hub Marketing” and get these hubs to market for you- for FREE! And Chuck “The Numbers” Violand reminds us that “every number tells a story” and you need to “listen” by focusing on your numbers. And yes, Steve occasionally allows me come here and share my “thinking outside the box” ideas! For example…

There are many restoration contractors who make so much money working right in their own back yards that they have no desire to service insurance jobs outside of their area or specialty. So ask claims adjusters, claims managers, agents, and others involved in the process to give your company a shot at serving their customers who are in these “fringe” areas.

Or ask your insurance contacts to let you be their “back-up” contractor. When their “main guy” is swamped you’ll be delighted to pick up the overflow. And if you follow Steve’s Value Added Service procedures then eventually you’ll win that adjuster over and you’ll become their new “Main Guy”!

NOTE: Another dangerous “Simon says” rule is you must huge amounts of kickbacks to adjusters for their referrals. I reject this and have explained on this website WHY paying off plumbers is a self-destructive practice. I’ve also shared HOW you can get plumbers on your side without paying them one dime!

So the question has to be asked: Will you follow the rule of “Simon,” or the innovative spirit of Sam? Tell us your thoughts in the comments section below!

Ivan Turner is the CEO of ShowMe Marketing Solutions. ShowMe Marketing helps cleaning & restoration companies grow in a very competitive industry.  Ivan has authored two books- Marketing to Agents & Adjusters, Plumbers and Building a Successful Cleaning & Restoration Business and  has been published in “Millionaire Blueprints” and “ICS” magazine. ShowMe Marketing also offers a comprehensive Employee Policy Manual package that can be customized to fit your business. Contact Ivan at (573) 291-0234 or check out showmemarketingsolutions.com