The E-Myth: Why Most Small Businesses Don’t Work and What to Do About It by Michael Gerber 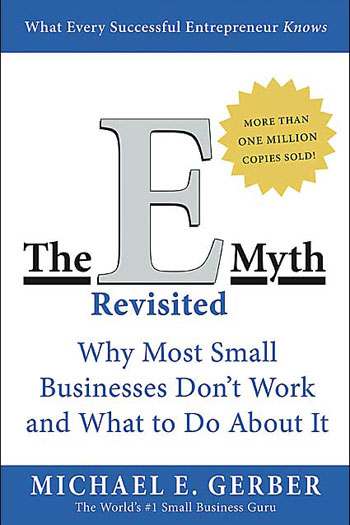 Long ago and in a far off galaxy (actually Columbus, Ohio but that doesn’t sound as cool) I was working the booth at the United Carpet Cleaners Institute convention. Wandering down the hall I decided to go into one of the breakout sessions. It was a small room with about twenty attendees so I took my customary seat in the back row.

The speaker walked in wearing a three-piece navy suit, stiffly starched white shirt, and a solid red tie. He spoke with the passion of a revolutionary and yes- his message resonated with me and everyone else in that room.

The man was Michael Gerber, author of a book I had never heard of: The E-Myth: Why Small Businesses Don’t Work and What to Do about It. While Michael’s book was directed at any small business I became convinced he had been riding around in the back of my carpet cleaning van. How else would he know every mistake I had made over the past several years?

The E-Myth (the “E” stands for”Entrepreneurial”) states that most businesses fail because they are not founded by entrepreneurs, but by “technicians” who are suffering from an “entrepreneurial seizure.” That sounded kind of harsh but Gerber was speaking the truth.   He forcefully pounded home the point that knowing how to do the work of the business has nothing to do with building a business that works!

You see, a carpet cleaner or restorer builds a business that depends upon themselves, around their skills, interests and passions. For example, a carpet cleaner develops a secret concoction that really knocks out urine odor which he firmly believes will make him rich. So he spends all his time cleaning smelly carpet and when a new competitor hits town with a cheaper price he beats it. After all he works out of his home so no rent, he is the tech so he doesn’t have to pay anyone else and he has a cellphone so he can take all the calls eliminating any office staff.

Sound like the American dream?  After all, our new cleaner/restorer is his own boss with no one to tell him what to do or when to work!  Life is good! He is even free to wear jeans and a torn t-shirt with his logo on it! Yes- life is GOOD!

But our “free as a bird” entrepreneur is afraid to hire another technician because he is struggling with the “no one can clean carpet as well as me” syndrome. Besides that, our E-Myth owner hates office work and despises “selling”.  Instead, he gets most of his pleasure from cleaning carpet and especially the really trashed ones.  What a great feeling of accomplishment!  At night he scans the industry bulletin boards comparing which chemical works best.

And then one day he trips over his solution hose, falls down the stairs and breaks his arm. The stark realization hits the this hard-working carpet cleaner square in the face.  He doesn’t really own a business, he “owns a job” and now he can’t even do this job!  Yes, his “American Dream” has dissolved into a his own personal nightmare!

This story may sound familiar to you.  (Maybe too familiar?)  But even if you are stuck in the vortex of the technician mentality you CAN “reboot” your business and your life!  the question is HOW?  Pay attention here…

The E-Myth states we have three “Business Personalities”:

1. Entrepreneur – a “future-focused” VISIONARY who pursues opportunities.
2. Manager – a “past-focused” WORRIER who plans and orders.
3. Technician – a “present-focused” WORKER who concentrates on the work to be done.

Gerber’s mantra is to “work on your business- not in it”! That doesn’t mean you can’t start out as an owner/operator.  (After all, this start-up phase is a necessary step.)  But even in the beginning you should have a plan to grow the business. Author Stephen R. Covey preached “start with the end in mind.”

Sure, you can run a small business by themselves if that is what you choose. But most people have bigger dreams. Gerber reminds us that in order to grow your venture into a “real business” you must create systems as if you are going to eventually franchise your operation.  So what will systems mean for you?  Let me count the ways…

At the end of the seminar I attended in Columbus, I bought Gerber’s cassette tape program. (After all it was 1986!) About the same time another guy was rafting down the Dolores River in Colorado. He had thrown a few books into his raft to read on the trip. One of them was The E-Myth. When he returned to his business in Durango, Colorado he completely changed his company based on Gerber’s principles. This allowed him to sell his business and retire at the age of 38.

You may have heard of him. His name is Steve Toburen and Steve developed a class called Strategies For Success (SFS) for Jon-Don.   Steve says SFS is The E-Myth brought out of Gerber’s philosophical clouds and down-into-the-trenches for the cleaning and restoration industry.

I highly recommend you read The E-Myth.  Then come to Strategies for Success. Both together will change your life.  They did mine.

PS  The SFS program is so much more than what Steve Toburen calls “motivational fluff”.  For example, check out the thousands of pages of “plug-and-play” systems, procedures, manuals and business resources included for free on the new SFS 4GB USB “Business on a Flash Drive”.

2 thoughts on ““The E-Myth” is still changing lives…”